The Thief On The Cross Was Never Water Baptized, Yet Jesus Promised Him Paradise

Luke 23:43, “And Jesus said unto him, Verily I say unto thee, To day shalt thou be with me in paradise.”

A powerful and wonderful truth is taught by the account of the thief on the cross. There were two thieves, and then the perfect and sinless Lord in the middle. Jesus never sinned, not even once. 1st Peter 2:21-22, “For even hereunto were ye called: because Christ also suffered for us, leaving us an example, that ye should follow his steps: Who did no sin, neither was guile found in his mouth.” The Lord was sinless, the perfect Lamb of God (2nd Corinthians 5:21; Hebrews 4:15; 1st Peter 1:18-19).

One of the thieves on the cross challenged the Lord, saying, “If thou be the king of the Jews, save thyself” (Luke 23:37). The unsaved world are always challenging God... IF THOU BE! The truth is that even if Jesus had delivered them from being crucified, that unbelieving thief still wouldn't have believed. The rich man went to Hell and was in flames and torment. The man begged Abraham to send Lazarus from the dead to warn the rich man's five brothers. Abraham said that if those brothers wouldn't listen to the preaching of the Word of God, then NOTHING would convince them of the gospel. Luke 16:31, “And he said unto him, If they hear not Moses and the prophets, neither will they be persuaded, though one rose from the dead.” If people will not get saved after hearing the simple gospel, then nothing will convince them. If men will not heed the conviction of God's Holy Spirit, then our eloquent words of wisdom will not convert them.

Yet, there was also a thief on Christ's other side, who defended Jesus and believed on the Lord to be saved. Luke 23:40-42, “But the other answering rebuked him, saying, Dost not thou fear God, seeing thou art in the same condemnation? And we indeed justly; for we receive the due reward of our deeds: but this man hath done nothing amiss. And he said unto Jesus, Lord, remember me when thou comest into thy kingdom.” And then we read one of the most beautiful statements in the Bible in Luke 23:43, “And Jesus said unto him, Verily I say unto thee, To day shalt thou be with me in paradise.” Heaven is paradise according to 2nd Corinthians 12:4, “How that he was caught up into paradise, and heard unspeakable words, which it is not lawful for a man to utter.” Paul was caught up into Paradise, which is Heaven. What a wonderful truth! Paradise sounds real good doesn't it?

Why would any person choose to spend all eternity in the fires of Hell, burning in flames and suffering the vengeance of an angry God (2nd Thessalonians 1:8-9). The Lake of Fire is forever, without end, where the Bible warns there is “no rest day nor night” (Revelation 14:11).

The Thief On The Cross Was Born-Again Without Water Baptism

There is only one gospel. There has never been multiple plans of salvation. Salvation has always been by grace through faith in Jesus Christ, plus or minus nothing. The Bible teaches that Abraham was saved by simply believing in the Lord (that is, trusting upon the Lord). Genesis 15:6, “And he believed in the LORD; and he counted it to him for righteousness.” Romans 3:4-6 confirms that truth.

This truth teaches us irrefutably that water baptism is NOT a requirement for salvation. False religions ADD the requirement to be baptized to be saved in their religion. Mormons, Roman Catholics, Jehovah Witnesses, Seventh-Day Adventists, Christian Science, Greek Orthodox Church of Christ and numerous other demonic cults ALL REQUIRE WATER BAPTISM FOR SALVATION. They are liars, deceived and of the Devil. Getting baptized gets you wet, period.

Furthermore, some religions (such as Presbyterian and other Protestant faiths) preach the correct gospel, but they pervert the Biblical meaning of water baptism by teaching that it bestows some grace upon the believer. May I say, there is no special grace bestowed upon any believer who is water baptized. Baptism is one's public profession of faith. Biblical baptism is always AFTER salvation and is always by IMMERSION under water. Baptism pictures Christ's death, burial and resurrection. Sprinkling by water is unbiblical. Baptizing infants is unbiblical. Baptism is ONLY for born-again believers.

The Lutheran religion is of the Devil, preaching a false gospel of works salvation. Martin Luther taught up until his death that holy mass and holy baptism (neither term is found in the Bible) are required for salvation. This is evidenced plainly in Luther's large and small catechisms. Luther came out of the Catholic religion, but the Catholic religion never came out of Luther. Although many Christians desire to give Luther the benefit of the doubt, Luther's own writings condemn him as an unbeliever who taught a corrupt gospel of works salvation.

The following quote is from Luther's Small Catechism, as promoted by the Wisconsin Evangelical Lutheran Synod (WELS). The quote is also found under the section, “THE SACRAMENT OF HOLY BAPTISM”; and then under the subheading, “THE BLESSING OF BAPTISM” ...

Second: What does Baptism do for us?
Baptism works forgiveness of sin, delivers from death and the devil, and gives eternal salvation to all who believe this, as the words and promises of God declare. What are these words and promises of God? Christ our Lord says in the last chapter of Mark, "Whoever believes and is baptized will be saved, but whoever does not believe will be condemned." (underline added)

What a damnable lie of Satan!!! Not one verse in the entire Bible teaches that “Baptism works forgiveness of sin.” Just as the thief on the cross was never baptized, neither does anyone need to be baptized to get to Heaven. Eternal life is a gift paid for by Jesus' precious blood. We don't do good works to get saved, and we can't do bad works to be unsaved. Salvation is of the Lord as Jonah pondered in the belly of the whale in Jonah 2:9. Acts 10:43 teaches that people in the Old Testament were saved the same as we are today, that is, by believing in the Lord to have our sins forgiven. Acts 10:43, “To him give all the prophets witness, that through his name whosoever believeth in him shall receive remission of sins.”

Are You Resting In The Gospel Of Jesus Christ? 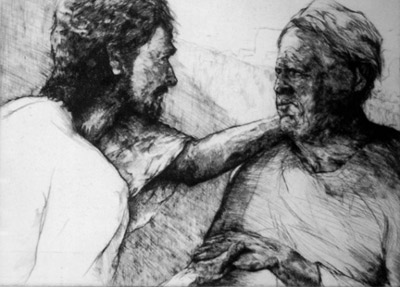 Thankfully, and fortunately, every person is offered the free gift of eternal life and forgiveness in Christ. I can't believe that so many people flaunt God's mercy and grace, even blaspheming the very God Who has given His Son for their sins. Wow! I am not worthy, and neither are you! Can any man truly grasp the greatness of what God has so marvelously done for us? I think not.

There's no other book, nor religion, nor prophet, nor teaching, nor philosophy in existence that can even compare or compete with the awe, greatness, amazement and grand scale of what the Bible reveals; of all that God has done for mankind through the Lord Jesus Christ!!! Oh my friend, whoever you may be, I plead with you... “How shall we escape, if we neglect so great salvation; which at the first began to be spoken by the Lord, and was confirmed unto us by them that heard him” (Hebrews 2:3). Acts 4:10-12 plainly states that there is NO other name given among men, whereby we must be saved, than the name of JESUS CHRIST OF NAZARETH!!!

Romans 4:5, “But to him that worketh not, but believeth on him that justifieth the ungodly, his faith is counted for righteousness.” Repeatedly we are warned throughout the Scriptures that God's salvation is offered freely to mankind (Ephesians 2:8-9; Romans 11:6; Titus 3:5); paid for by God's gift of His dear Son, and the blood that He shed for us. How much greater then are we insulting God, even trampling underfoot the blood of His covenant, when we ADD anything to it. Don't be deceived, no one who professes to be a Christian is truly saved if they HAVEN'T yet ceased from their own human efforts...

Hebrews 4:10, “For he that is entered into his rest, he also hath ceased from his own works...”

Those who teach that faith alone cannot save, but that there must also be human effort—to depart from sin, forsake the world, and surrender to Christ—are NOT SAVED!!! Hebrews 4:10 confirms this! There's a fine line between faith and foolishness, between Heaven and Hell, between salvation and damnation. The dividing line is human effort. Add it and your doomed. Cease from it, and trust upon the Lord, and you're saved! Any attempt to improve mankind spiritually without the Gospel is religious humanism. Don't leave out the cross!!! Jesus DIED, was BURIED and RESURRECTED after three days. That's the Gospel according to 1st Corinthians 15:1-4.

What an awesome God!!! I encourage you whoever you may be to place your total trust in “the Lamb of God, which taketh away the sin of the world” (John 1:29). Christ bore our burden of sin upon the cross, so we don't have to go to Hell forever. Thank you Lord Jesus for dying for my sins!

John 20:31, "But these are written, that ye might believe that Jesus is the Christ, the Son of God; and that believing ye might have life through his name."

It's not what you're doing that gets you to Heaven, it's where you're looking. Look to Jesus!